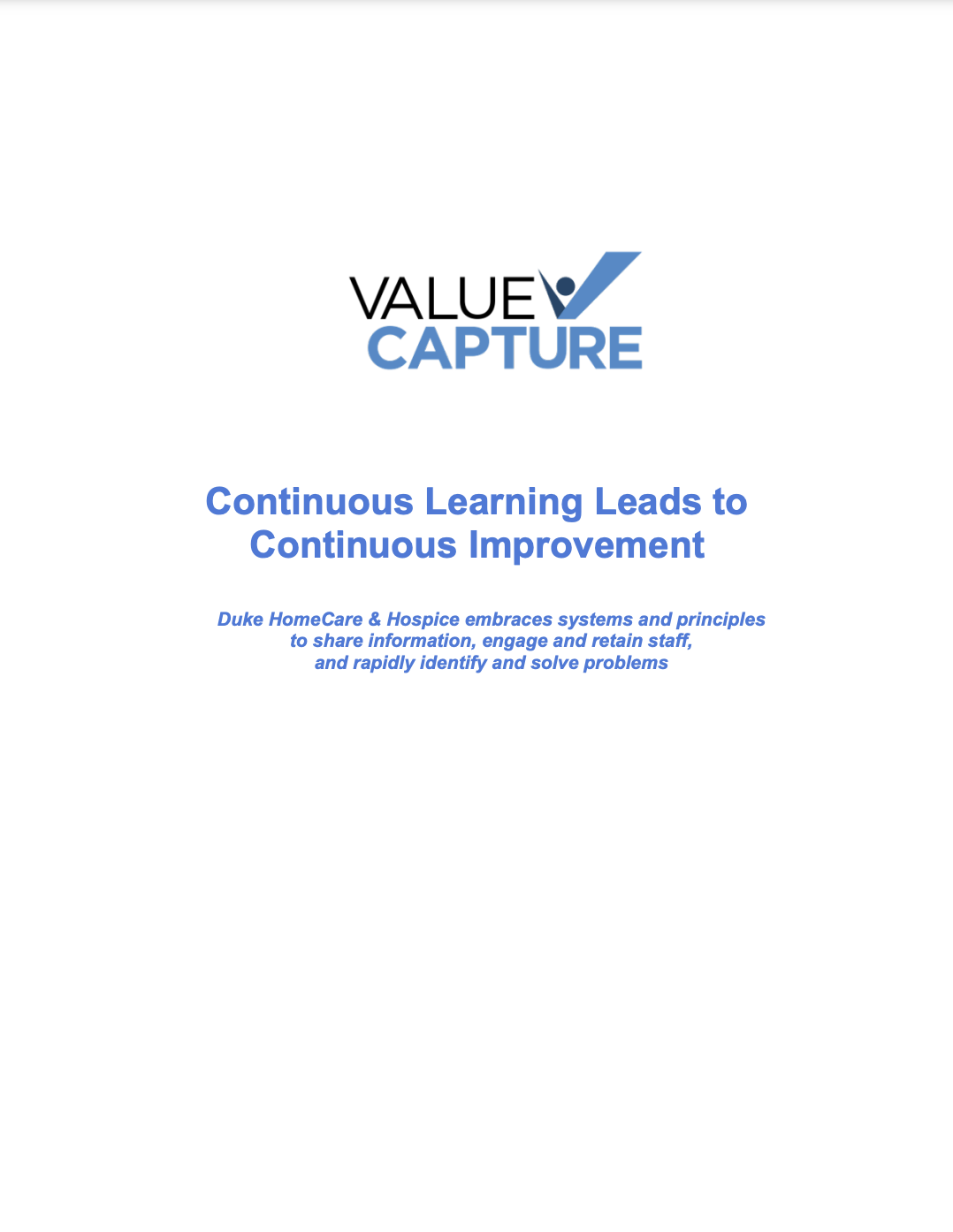 By registering to receive this white paper, you will also receive occasional email newsletters and other email communications from Value Capture. You can unsubscribe at any time.

At a time when healthcare systems and their staffs were overwhelmed by the COVID-19 pandemic, Duke HomeCare & Hospice (DHCH) was able to improve the care that it provides its patients and the work, satisfaction, and retention of its staff. The Duke Health agency reduced nurse turnover by 50 percent, decreased billing delays by more than two-thirds, and improved the reporting and capture of data for in-home patient safety.

Duke Health has partnered with Value Capture since 2018 to help evolve its Duke Quality System via an organization-wide commitment to zero harm for Duke’s patients, their loved ones, and Duke team members — i.e., no one injured while interacting with Duke Health. The cornerstones of the approach are empowering frontline team members to problem solve, with leaders at all levels serving as coaches and supporting rapid improvement. DHCH began work with Value Capture in November 2019 during a second wave of implementation underway within Duke. However, DHCH leadership recognized they would need to modify their approach because of the significant differences in the way that homecare is delivered. “We implemented [the system in a way that reflects] the differences in the workforce and the settings of care,” says Cooper Linton, Associate Vice-President. “There’s a different culture in community-based care than there is in the hospital.”

Mike Radtke, Value Capture Senior Advisor, says that DHCH, under Linton’s leadership, had begun to transform the culture of the agency from one where problems are solved by leaders to one in which staff identify and solve problems because “staff did not have many great opportunities to bring issues forward, let alone participate in addressing the issues themselves. He was really looking to create an open, engaged, and safe culture — not only physically safe but a professionally and emotionally safe culture — that was going to provide the best home care and hospice services.”

While DHCH’s workplace was different from that throughout Duke Health, its objectives were not. The agency was learning and applying new systems and practices that would help to prevent harm to patients (aiming for zero harm), increase access to patient care, improve the culture of the organization, and better engage and retain staff.  “We were trying to get down to what was really the problem, focus on the people, and do real-time problem-solving,” says Janet Burgess, Director of Patient Care Services Home Health. “The main thing was getting the clinicians in the field involved in this, because they’re the ones that do the work and really have the true input of how we can make a difference.”

DHCH needed systems and processes to help facilitate communication, learning, and experimenting across the different homecare departments, says Rich Kenny, Nursing Informatics Systems Specialist. “Some of this work is about being willing to test things, try things, open up more dialogue, and being willing to say, ‘I don’t have the answers, but I’m willing to learn.’”

The agency’s problem statement identified burnout, turnover, and ineffective training among staff caused by unclear and inefficient workflows and associated documentation requirements. In light of nursing shortages in healthcare and industry trends, Kenny says DHCH needed to find ways to mitigate those issues and create a culture where people want to work, where they feel safe and supported, and where risks are managed.

DHCH data also indicated the need for these improvements, such as extremely high turnover for nurses (especially first-year nurses) and excessive days to initial billing, says Burgess. “We had issues. We had feedback from our clinicians that our processes were ineffective and that our documentation was burdensome. We had data that showed beforehand that we needed to make change.”