What is "Habitual Excellence?"

And what should that mean for your healthcare organization?

"Habitual excellence" is a phrase that we use a lot at Value Capture. Our clients use this phrase.

But what does it mean?

It's the title of our podcast series, but it's much more than that.

On this page, you'll find:

The phrase, as we use it, has its origins in one of our key mentors, the late Paul O'Neill, who was, among other things, the CEO at Alcoa, U.S. Treasury Secretary, and our first non-executive Chairman here at Value Capture.

You Can't be "Partially Habitually Excellent"

Here's how O'Neill introduced the concept of Habitual Excellence in one of those speeches:

"...habitual excellence to me means everything. One of the things I discovered, in the different privileged [leadership] responsibilities I’ve had, is that it’s not possible for an organization to be partially habitually excellent. There’s a tendency to regress toward the mean."

"One of the frustrations in health and medical care across the country — I’m all over the country and have been now for the better part of two decades talking about these things — is that people are inclined to do projects. It’s amazing how much progress you can make with a project for a period of time."

"It’s also amazing how there’s an erosion of success if you’re surrounded by stuff that’s not habitually excellent. It’s really hard to protect an excellent experience if your interfaces are with parts of the organization that aren’t excellent, because they pull you down."

"I believe organizations are either habitually excellent or they’re not."

"You can’t be partially habitually excellent. You need to strive for the whole thing. I have to tell you, I didn’t get a lightning bolt. I’ve been on a lifelong learning journey."

How did O'Neill get Alcoa started on their path to Habitual Excellence? By leading with safety.

O'Neill told the organization that safety was a "precondition, not a priority." Making public statements that "nobody should ever get hurt at work" were followed by concrete actions that helped every person in the organization know that he meant what he was saying.

O'Neill said, "It was the beginning of coalescing the people around, for me, a really important part of habitual excellence. In order to have a workplace where people never get hurt at work, you have to identify every risk.

If there is an incident, you need to be on it immediately. You need to do a root-cause analysis. Then the power of large organizations, once you’ve done that, if you have absolute transparency and complete information sharing, you don’t have to learn the same lesson over, and over, and over again.

That’s how you leverage an organization:

By learning from everything gone wrong and sharing it across all of the artificial boundaries that we’ve created with organizational designs so that everyone is a beneficiary of learning."

O'Neill learned, and demonstrated through others, that these leadership behaviors are necessary to drive Habitual Excellence:

And as a result:

Read a more detailed summary of the "Playbook."

The Things Only a Leader Can Do

O'Neill realized that there were certain things that only he, as CEO, could do.

"An organization has the potential for habitual excellence, people can say yes to those three questions every day."

What are those three questions? Read more.

Learn more about the "playbook for habitual excellence" in this free eBook:

Results from Alcoa — No Tradeoffs

Using this "playbook" as CEO of Alcoa, O'Neill led a huge reduction in employee harm and lost workday injuries, as shown in the chart below (O'Neill was CEO from 1987 to the end of 2000). Industry-wide healthcare worker lost workday rates in the United States during part of that time frame are overlaid (in orange).

In 1987 when O'Neill became CEO, they were already in the top third of all companies when it came to employee safety, having a 63% lower harm rate than industry as a whole.

They thought they were doing well enough.

Under O’Neill, they accelerated toward zero harm, as you can see. Paul left in 2000, but in 2009 as Alcoa continued to improve, it was 26x safer to work anywhere in Alcoa (mining, smelting, manufacturing, etc.) than it was in an American hospital (the core of Value Capture’s mission is bringing these ideas to healthcare).

Was leading with safety a tradeoff with financial success? Hardly. In fact, O’Neill and the Alcoa community would argue just the opposite — safety was the leading indicator for their financial success. ​

Alcoa's market cap rose 9x higher during his time as CEO (again, ending in 2000, as shown by the blue arrow). Alcoa stock price (part of the Dow Jones Industrial Average) outperformed the DJIA as a whole​ over that time. 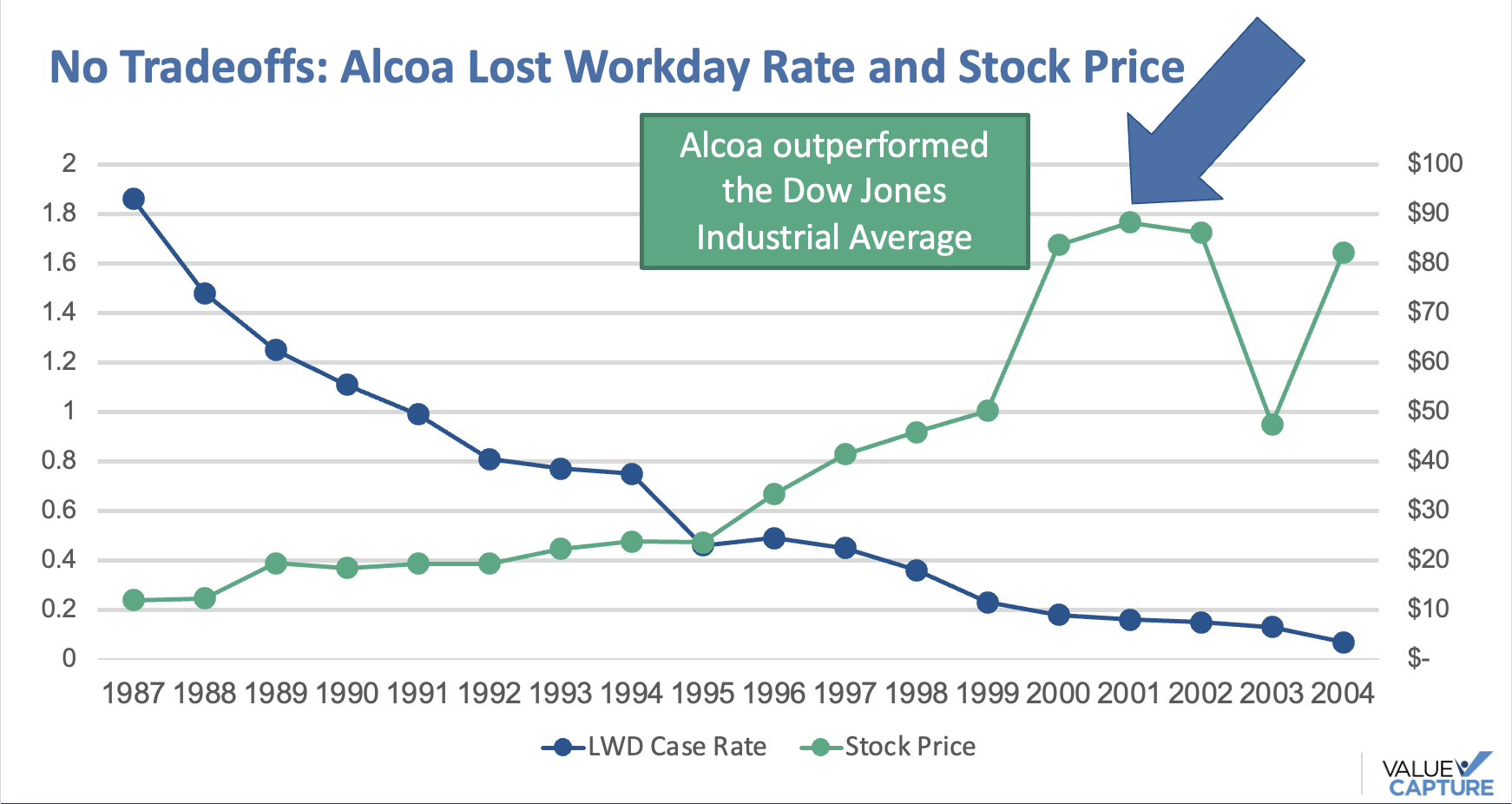 O'Neill taught us to stop accepting tradeoffs that are viewed as necessary or inevitable. Value Capture has learned, through our partnership with clients, that commonly assumed tradeoffs are not laws of nature that must be. In fact:

“If the rate continues to fall after I leave, I will have been a success.”

The improvement at Alcoa, while led by O'Neill as CEO, wasn't all about his leadership. When you develop a culture of safety — and a culture of continuous improvement and scientific problem solving — it becomes self-sustaining, as shown in the chart below: 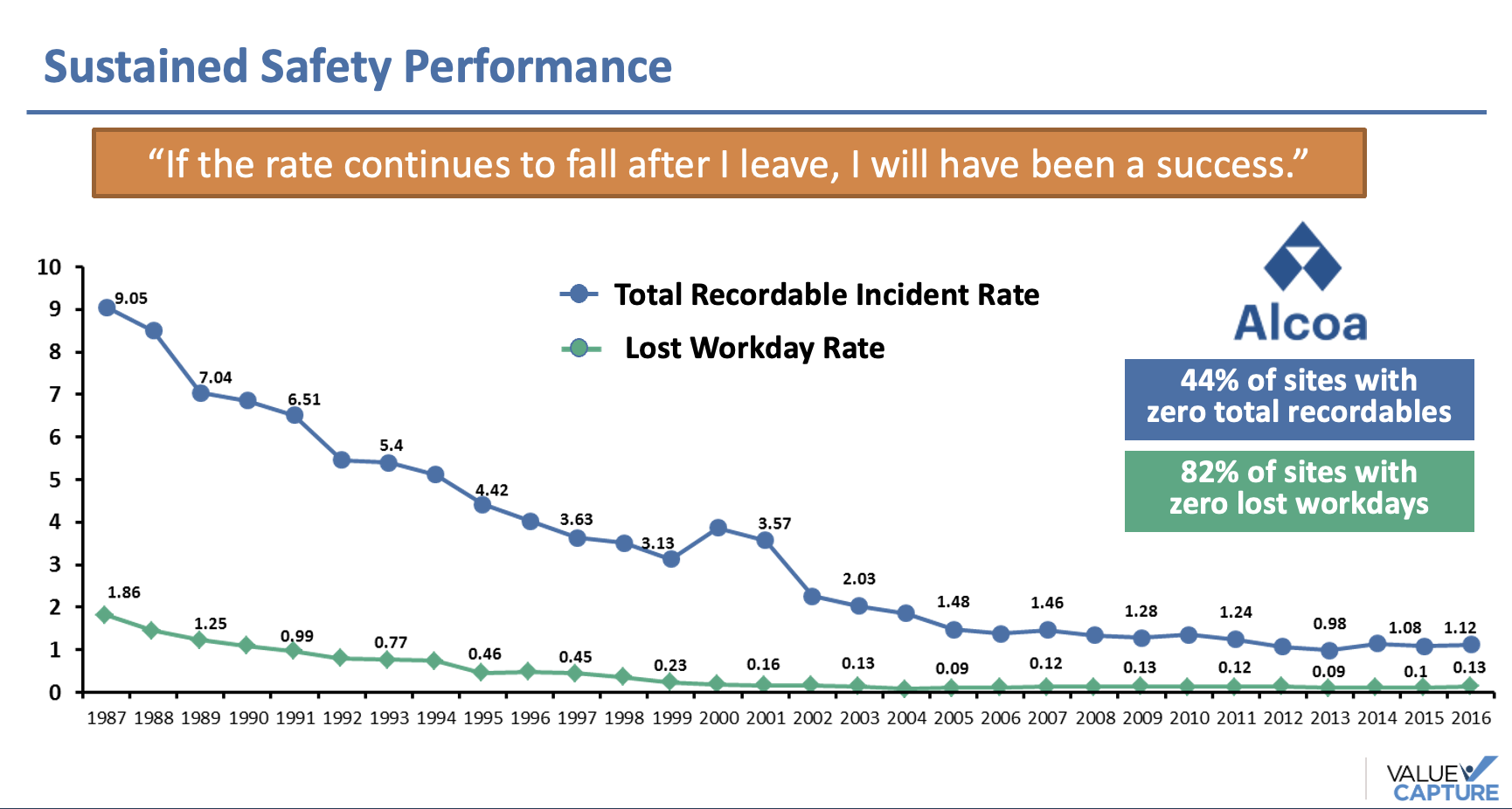 Alcoa became the safest place in the world to work, passing DuPont. Alcoa had achieved:

Talk to Value Capture about how we can help you on this journey.

In episode #5 of our podcast, Value Capture's Geoff Webster, a Senior Advisor and Principal with our firm, talked about the Habitual Excellence concept and what that means to him.

Geoff says, "Habitual Excellence for me is really a state of being, for an individual or an organization, where there's an understanding that the things that you do every single day — the little things and the big things — are what have an influence on whether you get the results that you want."

"I think that you actually can't have Habitual Excellence without aiming for perfect."

Healthcare Leaders Who are Committed to Habitual Excellence

In our second free eBook, Lasting Impact, leaders from many health systems shared their thoughts on Habitual Excellence and what it has meant to them.

Value Capture has been privileged to partner with many clients and their executives who share the values that lead us down the path to Habitual Excellence.

Dr. Rick Shannon has been a senior leader at many health systems over the past 20 years. When he was at Allegheny General Hospital in Pittsburgh, Dr. Shannon learned directly from Paul O'Neill and remains influenced by him to this day.

"Richard Shannon, MD, Chief Quality Officer at Duke Health, met O’Neill in 1998... He eventually became involved with PRHI and O’Neill, and says he admires him more than any of the great minds he encountered in his 35 years of medicine as well as 17 years at Harvard Medical School and seven years at the University of Pennsylvania.

Dr. Shannon was so overwhelmed by O’Neill’s approach that he gave up his research career “because he taught me that discovery didn’t have to be confined to a lab. It was a daily exercise in human behavior and in leadership. So I literally gave up what was 40 percent of my effort and began to think along the lines of developing quality platforms in healthcare. By 2003 or 2004, I was a completely different person.”

As a senior leader in healthcare, Dr. Shannon says he has built everything in his organizations around the principles of quality and safety. “Yes, we do have budgets, but I pay no attention to the budgets. I believe that if we do it right, the economics will follow.

That is an O’Neill lesson.

I don’t want to be misleading. There are people in the organization that spend a lot of time on the budget, but not me.

Everything begins with quality, doing the right thing the first time, no defect, no error, no waste is the ‘economically good thing,’ the term that Paul coined of perfect patient care.

And so I lead with an agenda of quality, not mergers and acquisition, not growth, not cost cutting, but the idea that building better clinical outcomes, making our patients better by delivering perfect care the first time, is the economic secret sauce of healthcare. And that was an O’Neill-ism. That was something that emanated from Paul.”

"[O'Neill] said to me, ‘Dr. Shannon, I’m really not interested in the reasons why you can’t. I’m interested in what you’re going to do over the next year to improve these outcomes.’"

What results did Dr. Shannon achieve? At Penn:

Some of what was achieved later at UVA Health:

And some longer-term results:

Dr. John Toussaint is widely viewed as one of the world's leading voices on healthcare improvement, leadership, and "Lean." He was previously the CEO of a health system where he led their Lean Transformation efforts, as documented in many books by Toussaint and others.

"Dr. Toussaint was able to convince O’Neill to be a founding board member of Catalysis (then known as the ThedaCare Center for Healthcare Value) and, as a member, he attended every meeting.

“He always was very clear about what we should be doing,” says Dr. Toussaint. “He served eight years on the board and was invaluable from the standpoint of his laser-like thinking.

"He would not stand for anything but leadership’s total commitment to habitual excellence."

He would ask things like, ‘Do the organizations in the Healthcare Value Network have metrics around zero harm to employees or zero harm to patients? What are they doing to create that environment?’

We would work with a lot of different organizations in trying to apply lean thinking, but for him, it was about "are they really committed to zero?" He kind of kept us on a straight and narrow path in terms of [being] focused on employee safety. He was always asking, ‘OK, so when we talk about True North, where does safety come in? Where does employee safety come into that?”

“Safety is the best place to start to engage every employee in improving the work,” says [Value Capture Vice President of Advisory Services Didier] Rabino. “It helps to develop the idea of a theoretical limit of zero safety incidents for workers and patients, eyes to see issues, and emotional and professional safety to elevate all problems in full transparency in real time. Safety is also a lever to develop not only problem-solving capabilities, but also coaching skills.”

"As employees become emotionally and professionally safe to point out and solve safety problems — without fearing a negative response — it leads to ingrained behaviors and the confidence to apply those behaviors to non-safety issues."

Check out the recording of our free webinar: "Habitual Excellence Starts with Safety — Before, During, and After a Crisis."

In the webinar, you'll hear (among other lessons): 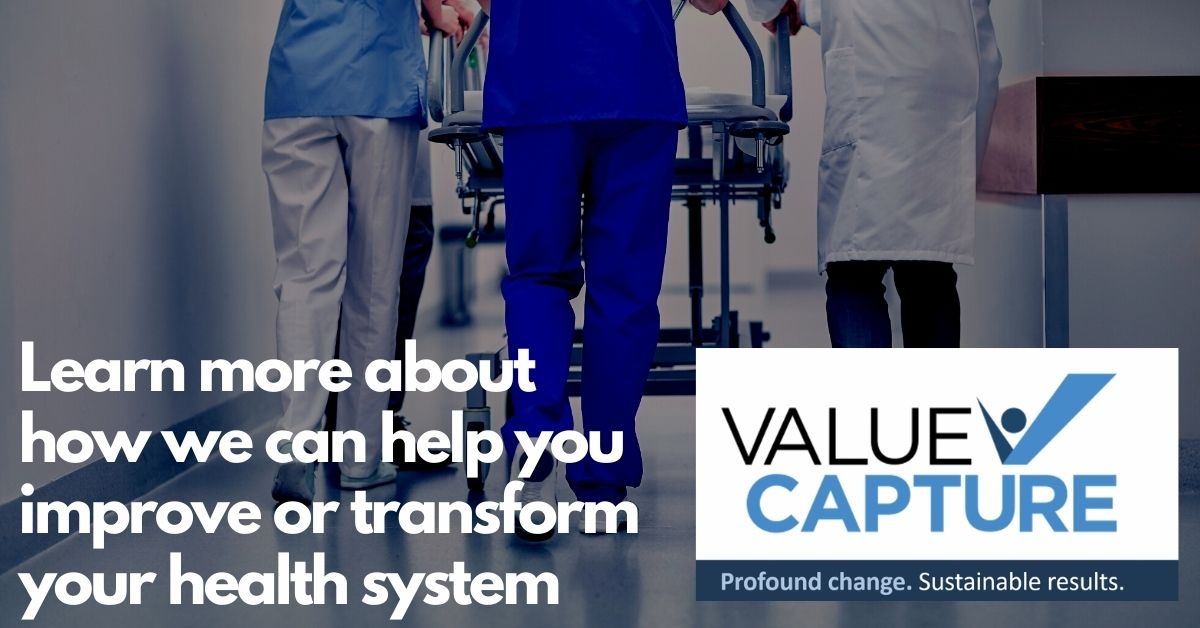